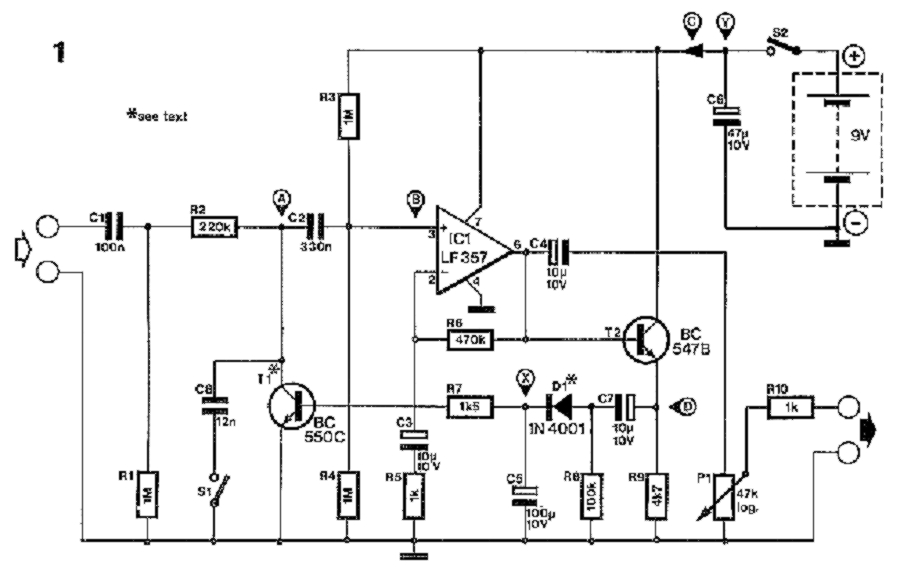 This audio compressor circuit based LF357, which versatile circuit serves to raise the average output power an AF amplifier. Its simplicity makes it suitable for applications in intercom systems, public address and discotheque equipment, and also ...

This audio compressor circuit based LF357, which versatile circuit serves to raise the average output power an AF amplifier. Its simplicity makes it suitable for applications in intercom systems, public address and discotheque equipment, and also in various types of transmitter.

Compression of music and speech essentially entails reducing to some extent the dynamic range of the AF input spectrum in order to drive an AF power amplifier circuit with a fairly steady signal level just below the overload margin, thus increasing the average output power of the system. Howerer, some distortion is inevitably incurred in the process of amplifying the relatively quit input sounds and attenuating the louder sounds. It is evident, therefore, that the control of the amplifier/attenuator function in the compressor determines to a large extent just how much distortion is introduced by the audio compressor circuit.

Before inserting any type of compressor in an AF signal path, due consideration should be given to the attack time. i.e., the time it takes the audio compressor circuit to detect and counteract a sudden increase in the amplitude of the incoming signal. Allowing for personal preference and the character of the input signal (speech, popular music, etc.), the attack time of a compressor generally lies in the range from 0.5 to 5 ms.

The release time of the compressor is the time it takes the circuit to return to the settings that existed before the rise in amplitude occured. Contrary to attack time, the release time is usually of the order of seconds. if it is made too short, the compressor’s attenuating action may cause interference with the lowest components in the frequency spectrum.

On the other hand, too long a release time (10-15 s) is also undesirable as this will give rise to an unrealistic and unpleasant affect caused by the output sound remaining completely muted long after the increase in input ampli-signal amplitude. in practice, the release time of a compressor will need to be adapted to meet the demand of the particular input signal; speech generally requires a longer release time than music.

Some compressors have a provision for the setting of the release time, but the ine proposed here is an auto-ranging type, that is, it arranges for the release time to change automatically with the instantaneous amplitude of the input signal.

On the above picture is the audio compressor circuit diagram. Despite its simplicity, the design responds adequately to a good number of contradicting requirements. As to its dynamic characteristics, an input signal change from 25mVpp to 20 Vpp is compressed into an output signal from 1.5 Vpp to 3.4 Vpp. Fro a less extreme signal change, from 25 mVpp to 2.5 Vpp, the compressed output signal changes from 1.5 Cpp to 2.25 Vpp.

The audio compressor circuit has an extended frequency response from 7 Hz to 67 kHz nominally, thanks to the use of a fast opamp, the type LF357 (IC1), which is set up here to provide an amplification of about 471 [(R6+R5)/R5]. Capacitor C3 blocks the direct voltage at the inverting input of IC1, and with R5 sets the low frequency roll-off the opamp alone at about 16 kHz.

Resistors R3 and R4 bias the non-inverting input of the Op-Amp and hence its output at half the supply voltage, ensuring optimum linearity. Capacitor C2 feeds the input signal to the opamp while blocking the bias voltage at pin 3. Its value is not critical, but it has some effect on the low frequency response of the compressor.

The attenuator section in this audio compressor circuit is essentially composed of R2 and T1. The collector of this transistor is held at 0V with the aid of R1 and R2. In this way, T1 is always operated in its saturation region, and its collector-emitter junction acts as a variable resistance controlled with the current fed to the base.

The higher this current, the lower the c-e resistance, and the higher the instantaneous attenuation of the signal fed to IC1. The controlling rectifier is composed of D1-C5-R7. Transistor T2 functions to provide the charge current for C7 so as to avoid distortion otherwise incurred by too heavily loading the IC1 output.

The rectified voltage across C5 is a direct measure of the output signal amplitude, and forward-biases the base of T1, which regulates the attenuation as discussed. The use of a diode with a low internal resistance, D1, and a buffer, T2, ensures fast charging and slow discharging of C5, and thus a short attack time and a long release time, respectively. As C5 is discharged via R7 and the base resistance of T1, the release time of the compressor is the product of the value of these three components.

When the base bias is rediced, the base resistance of T1 increases, lenghtening the release time. This is a most welcome feature, especially with speech signals. The output of the Op-Amp is fed to C4-P1-R10. which provide DC insulation and level adjustment.

Finally, when using this audio compressor circuit, make sure that amplifier has ample cooling provision, because it may well be continuosly operated at the top of its power rating. For the same reason, check whether the loudspeakers can handle the available power.

This circuit, connected with 32 Ohms impedance mini-earphones, can detect very remote sounds. Useful for theatre, cinema and lecture goers: every word will be clearly heard. You can also listen to ...

How to build FET Audio Mixer

This simple circuit mixes two or more channels into one channel (eg. stereo into mono). The circuit can mix as many or as few channels as you ...

This circuit turns-off an amplifier or any other device when a low level audio signal fed to its input is absent for 15 minutes at least.
Pushing P1 the device is switched-on feeding any appli...

his simple headphone amplifier circuit can be directly connected to other compact devices such as CD player, W...