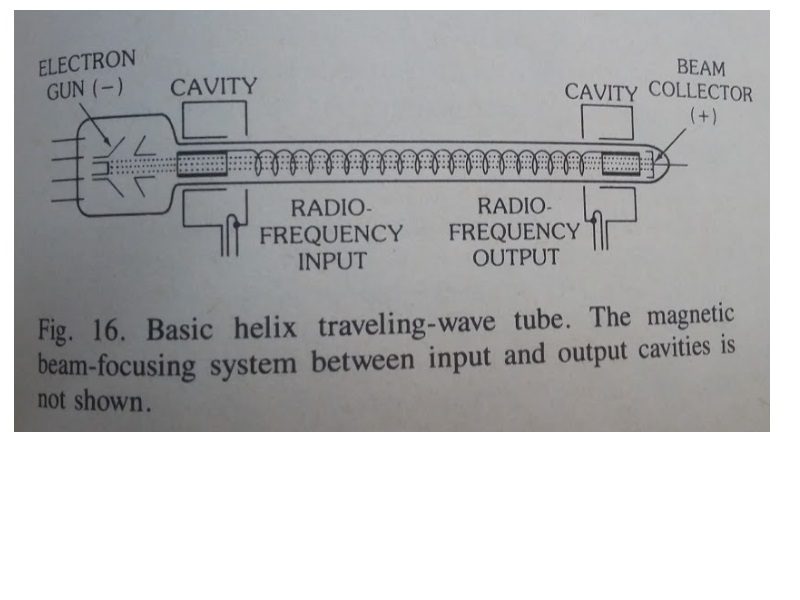 The Traveling Wave Tubes differs from the klystron in that the radio-frequency field is not confined to a limited region but is distributed along a wave-propagating struture. A longitudinal electron beam interact continuesly with the  field o...

The Traveling Wave Tubes differs from the klystron in that the radio-frequency field is not confined to a limited region but is distributed along a wave-propagating struture. A longitudinal electron beam interact continuesly with the  field of a wave traveling along this wave-propagating structure. In its most common form, it is an amplifier, although there are related types of tubes that are basically oscillators.

The principle of operation may be understood by reference to Fig. 16. An electron stream is produced by an electron gun, travels along the axis of the tube, and is finally  collected by a suitable electrode. Spaced closely around the beam is a circuit, in this case a helix, capable of propagating a slow wave. The circuit is proportioned so that the phase velocity of the wave is small with respect to the velocity of light. In typical low-power tubes, a value of the order of one-tenth of the velocity of light is used; for higher power tubes the phase velocity may be two or three times higher. Suitable means are provided to couple an external radio-frequency circuit to the slow wave structure at the input and output. The velocity od the electron stream is adjusted to be approximately the same as the axial phase velocity of the wave on the circuit.

When a wave is launched on the circuit, the longitudinal component of its field interacts with the electrons traveling in approximate synchronism with it. Some electrons will be accelerated and some decelerated, resulting in a progressive rearrangement in phase of the electrons with respect to the wave. The electron stream , thus modulated, in turn induces additional waves on the helix. This process of the mutual interaction continues along the length of the tube with the net result that direct-current energy is given up by the electron stream to the circuit as the radio -frequency energy, and the wave is thus amplified.

The feature of this AC/DC amplifier is its low cost due to the small number of parts used. It is quite suitable for phonograph reproduction with good gain capabilities from a less sensitive pickup....

This amplifier is a high gain unit suitable for increasing to headphone level sounds of very small amplitude. The contact microphone is a crystal or magnetic unit attached to an instrumanent soundi...

Because of its greater gain, this amplifier is capable of fair volume with any type crystal phonograph pickup or radio tuner. It delivers up to 1 1/2 watts output, which is about alll average 3" sp...

This amplifier, utilizing a dual power output-rectifier tube, is suitable for low volume from a phonograph pickup having at least two volts output. Either a dynamic or permanent magnet speaker may ...