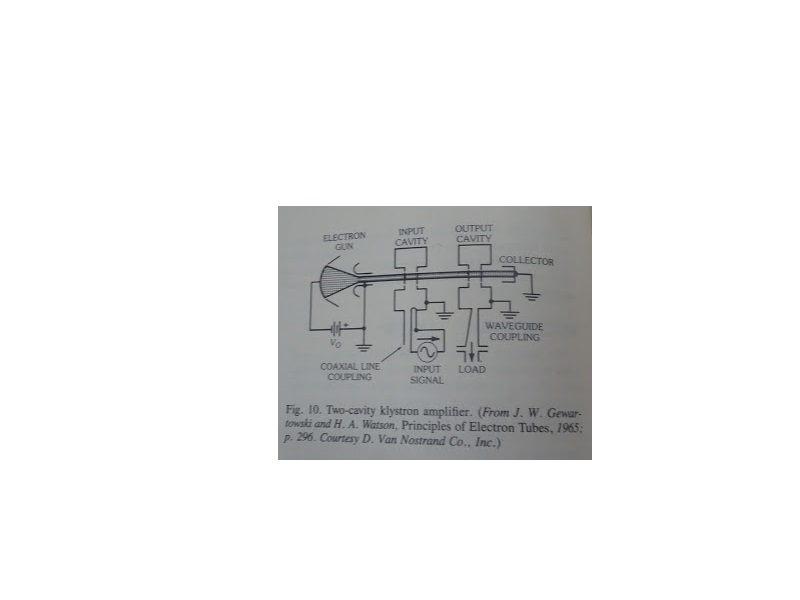 Klystrons is an electron tube in which the following processes may be distinguished:

A. Periodic variation of the longitudinal velocities of the electrons forming the beam in a region confining a radio-frequency field

Klystrons is an electron tube in which the following processes may be distinguished:

A. Periodic variation of the longitudinal velocities of the electrons forming the beam in a region confining a radio-frequency field

B. Conversion of the velocity variation into conduction-current modulation by motion in a region free from radio-frequenct fields.

Several variations of the basic klystron exist. These include the two cavity amplifier or oscilator, the reflex klystron, and the multicavity high power amplifier. Two-Cavity klystron amplifier: An electron beam is formed in an electron gun and passed through the gaps associated with the two cavities (Fig. 10). After emerging from the second gap. the electrons pass to a collector designed to dissipate the remaining beam power without the production of secondary electrons. In the first gap, the electron beam is alternately accelerated and decelerated in succeding half-periods of the radio frequency cycle, the magnitude of the change in speed depending on the magnitude of the alternating voltage impressed on the cavity. The electrons then move in a drift space where thre are no radio-frequency fields.

Here, the electrons that were accelerated in the input gap during one half-cycle catch up with those that were decelerated in the preceding half-cycle,  and a local increase of the current density occurs in the beam. Analysis shows that the maximum ot the current-density wave occurs at the position, in time and space, of those electrons that passed the center of the input gap as the field changed from negative to positive. There is therefore a phase different of m/2 brtween the current wave and the voltage wave that produced it. Thus at the end  of drift space, the initially uniform electron beam has been altered into a beam showing periodic density variations. This beam now traverses the output gap, and the variation in density induce an amplified voltage wave in the output circuit, phased so that the negative maximum corresponds with the phase of the bunch center. The increased radio-frequency energy has been gained by conversion from the direct-current beam energy.

The two-cavity amplifier can be made to oscillate by providing a feedback loop from the output to the input cavity. A much simpler but less efficient structure results if the electron-beam direction is reversed by a negative electrode, termed the reflector.

The feature of this AC/DC amplifier is its low cost due to the small number of parts used. It is quite suitable for phonograph reproduction with good gain capabilities from a less sensitive pickup....

This amplifier is a high gain unit suitable for increasing to headphone level sounds of very small amplitude. The contact microphone is a crystal or magnetic unit attached to an instrumanent soundi...

Because of its greater gain, this amplifier is capable of fair volume with any type crystal phonograph pickup or radio tuner. It delivers up to 1 1/2 watts output, which is about alll average 3" sp...

This amplifier, utilizing a dual power output-rectifier tube, is suitable for low volume from a phonograph pickup having at least two volts output. Either a dynamic or permanent magnet speaker may ...